I present here a number of improved designs of mills that are able operate with no external power being applied. This research was first published on 1st April 2003, but has been updated since as additional information has come to light.

Zimara's design which dates from 1518 was illustrated with a drawing by Burton Lee Potterfield that appeared in "The Perpetual Motion Machine of Mark Antony Zimara" By G. Kasten Tallmadge. Isis, Vol. 33, No. 1, 8-14. Mar., 1941.

Here you can see a very simple arrangement where a six bladed windmill is used to drive a set of three bellows, that in turn provide the wind that drives the blades round. Note that the bellows are directly connected to the hub of the windmill - there could hardly be a simpler mechanism. I assume that this 3 bellowed working version was a refinement of earlier versions - by having three sets of bellows it's clear they will each be at different parts of their inhale/exhale cycle, so the wind produced will be far smoother than the naive design that uses just one set of bellows.

The background of this woodcut is rather dark, so we can't actually see details of any actual millstones being driven here, but I'm sure that's just because the artist was concentrating on the novel parts of the design, rather than the mundane millstones themselves. The windmill that is shown is certainly a very simple affair, which shows a further very significant advantage of this design - because the wind is being generated from bellows, you know exactly which direction it is coming from, so there is no need for the mill to have any mechanism to keep it facing into the wind.

From the illustration above, despite the simplicity of the windmill itself, we can see that improving windmills represents an incredible engineering challenge due to the need to use very large bellows to provide sufficient wind. Therefore it's not suprising that far more designers have instead pondered how to improve watermill designs.

Francisco di Georgio designed a recirculating watermill, where he used some form of lever and bucket arrangement to raise the water that then flows over the waterwheel to drive both the millstones, and the bucket drive levers. This design initially looks to be quite compact, but on second glance it appears that there were problems with it - either the waterwheel and buckets are huge, or if they are drawn normal size then it is only capable of driving very tiny millstones. That's the problem with Medieval inventors - they simply didn't know how to draw properly dimensioned drawings.

Leonardo Da Vinci also sketched out a water driven design, though he dispensed with the bucket arrangement, instead using the popular Archimedes screw to raise the water. In fact as illustated, the only objective here appears seems to be that of raising water - an unusual slip up for Leonardo here in not taking that extra step so artfully added by other designers of actually adding a set of millstones to get even more work out of the design. This probably stems from Leonardo's emphasis on the theoretical, leaving others to fill in more of the practical bits of his designs. (I bet it was that Mona Lisa woman who distracted him from completing the design).

This image published by Robert Fludd in 1618 shows an endless chain pump being used to pull water up a water column, from where it flows over the waterwheel, and back in to the lower reservoir. No mill details are shown, just to keep the diagram clear, but the use of a lettered key for the component parts of the mechanism allowed Fludd to carefuly describe his device.

This second diagram is often attributed to Fludd, but is in a different style to his other known diagram. However it's still worth including the design here, snce it also uses an Archimedean screw to recirculate the water back to the top of the device producing an incredibly compact arrangement. The designer seems to have overcome the earlier problems with Francisco di Georgio's design, since here we see a reasonably sized pair of millstones being employed - in fact this device does seem to be very efficient - the diameter of the waterwheel is not that much greater than the diameter of the millsones it is driving.

I don't think that George A Bockler was an inventor himself, but he published his Bockler's Theatre of New Machines in the late 17th century, including a number of improved mill designs. 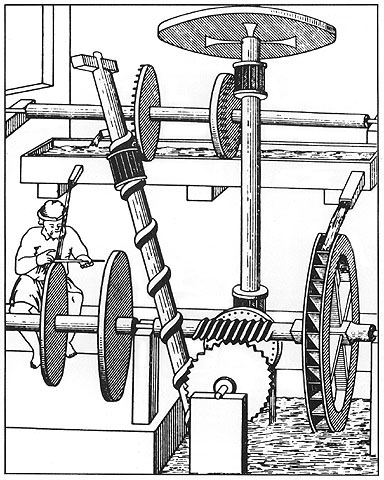 These two illustrations clearly illustrate the same design. Note the presence of a worm gear here - new components tied in with new thinking, leading to even better designs. In the illustrated device, the waterwheel is driving not millstones but grindstones, a reminder that improving the designs of mills helps not just in traditional flour production, but also other industrial processes. There's a further neat detail, where some of the water raised by the waterwheel not only drives the waterwheel itself, but is also used to cool the grindstone where the work of sharpening knives causes heat. It was unfortunately probably beyond the technology of the time to further use the steam from such cooling to drive a steam turbine, to generate even more power.

This illustration from Bockler does show millstones in use, with once again an Archimedean screw employed as the water raising device. However, instead of an overshot waterwheel, the water is used to drive a water turbine, with carfully contoured blades getting the most out of the water suppy - a careful consideration of economics being displayed here, with obviously much less materials needed for this turbine than for a full sized waterwheel.

Escher was an artist rather than an engineer, and his fresh eyes saw things that many of the earlier inventors missed - if you have the space then an even simpler arrangement is possible. Escher thus dispensed with the complexity of pumps, screws, or buckets and his ingenious design arranges things so that the water that drives the waterwheel then flows back along the watercourse, and over the wheel once again. With no reliance on an external water supply, this means the water will never run out, and will make it possible to build watermills in locations where they were once impractical, due to there being no rivers. (Indeed Escher's original design appears to show the mill built high up the hillside, where there is unlikely to be a river flowing down from above). Some of the details shown in this design are unclear - I have not been able to determine what the devices on the tops of the towers are for, though there is some suggestion that these are there to disguise mobile phone masts.

I know of no examples of surviving mills built to any of the plans on this page. If any reader knows of such a survivor, or indeed manages to construct a modern mill based on these designs then please let me know.